We are Counting: Big Migration of Eagle on the Way

21 Oct 2018, My colleague Sandesh has begun migration count at Thoolakharka watch site, Nepal. This year we could set up the count little late so that we couldn't meet up our first Steppe Eagle, which is likely to come our watch site between 7 to 12 October. Based on our previous count, it is likely we missed to say Goodbye to approximately 50 (range: 10 - 110) Steppies. Therefore, this is just a beginning for Steppe Eagle migration in this part and  many more still waiting to make their first takeoff of this long journey from the Mongolian Steppes and some already did it and suffering to cross high Himalayas from the eastern Nepal and even Bhutan. Satellite tracking data shows they mostly enter from the eastern Himalayas and follow the east west extension of Himalayan Mountain chain.

Besides Steppies we get fairly good species of raptors (however in low number), previously 35 species of migrating raptors were recorded here. Additionally 11 resident raptor species are around this watch site, for e.g. these includes majestic Bearded Vulture and Mountain Hawk Eagle. In the last two days Sandesh has recorded 10 species on migration. I made a comparison on these species number with the previous counts. Although it is not a good way to compare the data for only 2 days because the variation on several factors alters the migration timing. However it is the easiest way to mapping migration trend over timing. Presenting you a list of species and number that we got during two initial days and the graph.

This year raptor migration count is sponsored by Raptours (http://raptoursllc.com/), sincere thanks for the generous support. 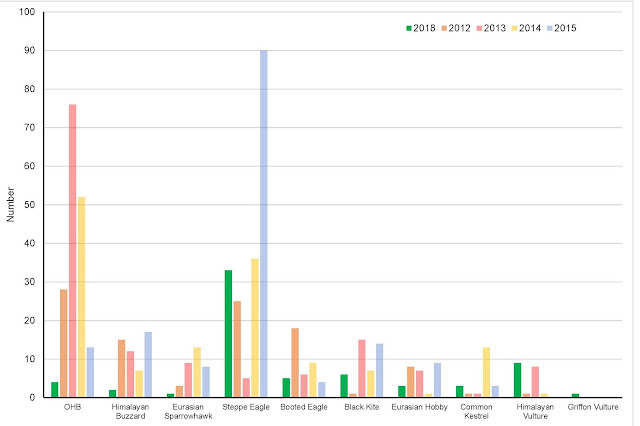 We are Resuming Raptor Migration Count in Thoolakharka- 2018 and Onwards 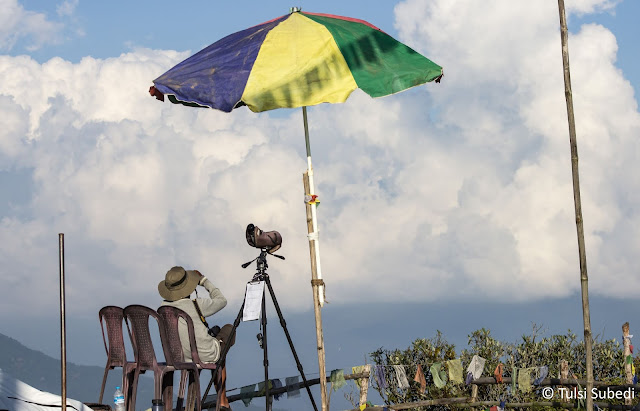 Dear friends and supporters, warm greetings on behalf of Raptors of Nepal Team!


Raptor of Nepal is a Raptor Studies Group in Nepal under Nepalese Ornithological Union (www.birdsofnepal.org). In Nepal, raptor study is a young field of research. Since 2011, Raptors of Nepal has started intensive study on diurnal birds of prey species throughout the country. In this period, we have conducted several interesting studies focused on birds of prey species. Some of these studies included raptor migration studies, raptor trade studies, wintering raptor survey in Nepal, raptor survey and monitoring in the Himalayas, GPS tracking of Bearded Vulture, breeding study of Indian Spotted Eagle etc. Raptor migration studies is the longest project we are conducting.


In 2012, we discovered a raptor migration watch-site in the elevation of 2050 m at the mountaintop of Thoolakharka along the southern rim of Annapurna Conservation Area at the foothills of Himalayan Mountains. Since its discovery, we utilized this watch-site to monitor migrating raptors during each autumn. We set up the official count between 15 September to 10 December (total 85 days) and continued until 2015. In 2016 and 2017 autumn, we could not perform count due to some technical reason because we had to focus this time on the Bearded Vulture project on which the lead member of this Group completing PhD.  Now we are pleased to inform you all- 2018 ONWARDS WE ARE RESUMING RAPTOR MIGRATION COUNT. We hope this will certainly provide useful information for the conservation of raptors in the regional scale.


Thoolakharka is one of the best place in the world to see migrating Steppe Eagle. In each autumn season we count approx. 6 000 – 9 000 migrating individuals of this eagle species. Since 2015, Steppe Eagle is categorized as endangered species by IUCN. Population of this eagle is considered continue in decline. In this sense, it is very important to conduct population monitoring and we are now in an ideal position to contribute species conservation by doing this. Our experience indicates, approximately 15 000 individuals of more than 35 species of raptors (including EIGHT globally threatened species and THREE near-threatened species) use this flyway to meet their wintering ground to the south.


We need your support to make this research possible. If you are interested to support (volunteering and others) raptor migration count please contact us at raptorsofnepal@gmail.com

First of all, my apologize for not posting updates regularly. Now I will have more time and make regular updates if I got something interesting.

In this post I am pleased to inform you about Indian Spotted Eagle project. One of my student Sandesh Gurung is currently working hard to collect data about the breeding biology of Indian Spotted Eagle in Nepal. This species is one of the rarest and least known eagle in the Indian subcontinent and that breeds in the lowland belts of Nepal. Currently Sandesh is conducting intensive study of few nests to understand breeding biology. Many interesting data are coming on our way that would definitely help to understand this species better. Dheeraj Choudhary is assisting Sandesh during the field work. I wish all the success of this project. See those recently taken pictures, Sandesh just sent me from the field. For details about the project and more updates please visit the link https://www.rufford.org/projects/sandesh_gurung

Posted by Tulsi Subedi at 7:32 PM No comments:

The most common species of large eagle in Asia, the steppe eagle (Aquila nipalensis) population is now rapidly declining throughout its range and that meets the criteria for endangered species. Therefore, International Union for Conservation of Nature (IUCN) has recently uplisted steppe eagle as “Endangered” species.
Within last two months two individuals of endangered steppe eagles have been confiscated from Myannar and Nepal, both were equipped with GPS transmitter. In both countries, local peoples captured those eagles. Locals were unaware on the transmitter so that they were curious to investigate on attached device as they were thinking the device could be some spy object sent from other countries. As a result, the eagles were sent to the nearest police station for further investigation, the information became public on this way.


Southern belt of Nepal aka “lowland Nepal” is a wintering area for several species of migratory birds including raptors. On 16th of February 2018, local kids captured last eagle in Rautahat district of lowland Nepal. When they found the device on eagle, the villagers were very concerned about it and decided to send the bird to nearest police station and finally police sent it to the forest office. Tracking bird with GPS transmitter is very new technology in Nepal and recently started in bearded vulture, red-headed vulture, white-rumped vulture and Bengal florican. Therefore forest officer were not very sure but they predicted the device looks like radio telemetry attached for the research purpose. The news was posted in social media including facebook and twitter. Local online media also posted the news on their page that broadcasted it throughout this small world within short time. I knew this news in the late night of same day in Malaysia, where I am staying for PhD degree. In the early next morning, I spoke with my co-supervisor Dr. Hem Sagar Baral in Nepal. He informed me the bird is already in central zoo of Nepal and they might want to keep the bird for display.   He asked me more about the bird’s profile. I provide the bird information and movement map with the collaboration from Dr. Hansoo Lee from Korea, who owns the manufacturer company of attached device and Prof. Nyamba from Mongolia who was attaching the device on bird. Dr. Hem played vital role to circulate this information among the zoo staffs and Director General of department of national park and wildlife conservation that helped to put more attention on the bird. DG has personally visited the bird at the zoo for the updates on health status and well-beings of the bird. No injuries observed, however the bird rather weak and recovering under the inspection of zoo veterinarians. Once the bird get fully recover, it will be released soon in the nature. Let’s be hopeful the bird will successfully fly back to its natal place in Mongolia in this coming early summer.
These two bird are the representative examples to show the threats to raptors. The information came into public because of the curiosity generated on peoples by attached transmitters. Number of cases (proportion of birds persecuted) are significant out of small numbers of steppe eagles’ equipped with GPS transmitter. Therefore, we can predict the cases of human persecution to raptors might be high enough albeit rarely information are available to science. GPS telemetry technology is very important to identify those threats and provide an opportunity to focus conservation works in the high-risk areas. More than 10 000 steppe eagles migrate through Nepal in each autumn (Subedi et al., 2017) and among them several winters in lowlands of Nepal. In 2017, a team of Raptors of Nepal and Himalayan Nature conducted a wintering survey of raptors in lowland area of Nepal to identify major wintering hot-spots. We are still thinking additional surveys for the reliable hot-spots identification. Those areas will be focused for the intensive conservation activities.
Posted by Tulsi Subedi at 9:59 AM No comments: