White-tailed Eagle back again in Pokhara


Status and record of Haliaeetus albicilla White-tailed Eagle in Nepal

There was no additional recording of this species in Pokhara since 1996. Recently in 17 March 2012 one sub-adult (immature) bird has been recorded at Pame area near the Fewa Lake in Pokhara.  Following is the picture of our observation.

Posted by Tulsi Subedi at 6:45 PM No comments:

This May, temperature is unusually  high in Pokhara. The high temperature make uncomfortable from the early morning that bite a lot during the whole day in field and mostly T-Storms and showers in the evening hours makes to come down the temperature. 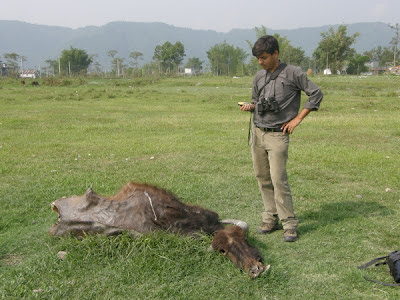 Carcass of the domestic ungulates is common food for vulture, which is dry off very quickly and hardens enough for vulture to eat. Sometimes river carries some carcasses and waste food for vulture, therefore we can see the vultures looking for food along the river corridor. 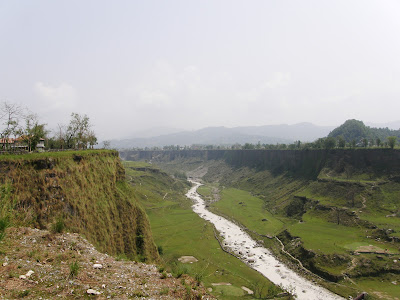 To escape from the high midday temperature, it is better to start field work early in the morning, say 7:00 am. Few species of raptors are frequently seen around Pokhara. Most numerous are the Black Kites. Of Course! Those are the common raptor seen everywhere in the country. However good flight of vulture is also seen.

Most of the Himalayan vulture might have to return back to the higher altitude.  Numerous vulture seen are White-rumped vulture and Egyptian Vulture; although good number of Red-headed and Slender- billed Vulture can be seen. Flight of Red –headed vulture has been seeing enough close to the ground from where it is easy to take a full-frame picture with small camera. Sometimes perched vulture can be seen over the small tree or rocks.

Steppe Eagles are not seeing in this time because all of them might have to return back to their summer ground in China, Mongolia and Southeastern Russia.
Other Raptors seen are Common kestrels .. they breed along the cliffs of Seti River.
Wish to see more pictures:

Please visit the link below
http://photo.net/photodb/folder?folder_id=1021128

Posted by Tulsi Subedi at 9:00 PM No comments: